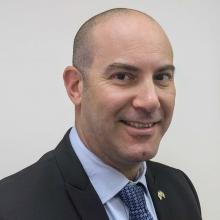 During the last 3 years, Assaf is in charge of promoting and developing the Japanese market for the Israeli security industry at the Economic and Trade department of the Israeli Embassy in Japan. As such, he takes a key part in strengthening the partnership between Israel and Japan in the homeland security and cyber security fields. For example, exposing Israeli companies for business opportunities in Japan and locating the relevant Japanese partners and working with Japanese government to seek collaborations initiatives, which resulted in the signing of the Memorandum of Cooperation between the Israel Ministry of Economy and Industry and Japan Ministry of Economy, Trade and Industry.

One of Assaf’s tasks is to promote the Israel industry to the Tokyo 2020 Olympic and Paralympic games.

Before he joined the Embassy, Assaf spent more than 20 years as a combat officer with extensive commanding positions. As a major at the Israel defense forces (IDF) at his last position he served as an operational expert at the advanced training school for command and control field units. As such he created and implemented new management methodologies which were implemented during combat and emergency situations.