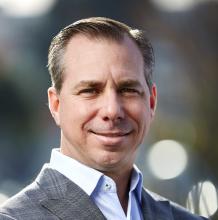 Eric McAlpine has spent over 20 years in the Technology industry as a strategic advisor to Boards, Founders & CEOs, a two-time founder, and award-winning engineer. He is a highly sought out speaker on the Cybersecurity market at major industry conferences, private events, and corporate gatherings sharing insights into M&A, capital markets, and industry trends.

Eric is a Founder & Managing Partner at Momentum Cyber a firm he co-founded in 2018 along with Dave DeWalt and Michael Tedesco. Momentum Cyber is the premier trusted strategic advisor to the Cybersecurity industry providing bespoke high-impact advice combined with tailored senior-level access from incubation to exit.

Eric is one of the top dealmakers in the Cybersecurity industry with a prolific M&A track record advising on and orchestrating deals with industry leaders such as ADT, Symantec, McAfee, Proofpoint, Mimecast, Hewlett-Packard, Acer, Amazon, CenturyLink, Google, Intel, and many more.

Prior to co-founding Momentum Cyber, Eric was Founder & Managing Partner of Momentum Partners, the precursor to Momentum Cyber. Earlier in his career, Eric served as a Managing Director with Blackstone where co-founded Blackstone’s Silicon Valley office and led the firm’s Cybersecurity advisory practice. In 2010, Eric was recognized by Steve Schwarzman with the CEO Star Award and featured along with a profile on one of his transactions in Blackstone’s 25th anniversary Annual Report for extraordinary contributions to the firm.

Eric began his Wall Street career at Salomon Smith Barney and Citi where he served as a senior member of the Enterprise Software Investment Banking team leading sector coverage in Security. Prior to a career on Wall Street, Eric served his country as a Captain in the U.S. Air Force where he was honored as the Military Engineer of the Year in 2000 for his engineering contributions to the Joint Strike Fighter Program, which included saving taxpayers $80 Million through an innovative stealth recoating design.

Eric earned an MBA with Distinction from Northwestern’s Kellogg School of Management where he was a 2-year Wade Fetzer Scholar. He also earned a BS Civil Engineering from Purdue University on an Air Force ROTC Scholarship as well as his MS in Engineering Management from the University of Dayton where he was a Dayton Area Graduate Studies Institute scholar – both full ride scholarships.