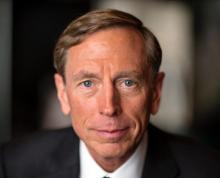 General (Ret) David H. Petraeus is a partner in the international investment firm KKR and Chairman of the KKR Global Institute, which supports KKR’s investment committees, portfolio companies, and limited partners with analysis of geopolitical and macro-economic trends, as well as environmental, social, and governance issues.  Prior to joining KKR, Gen. Petraeus served over 37 years in the U.S. military, culminating his career with six consecutive commands, five of which were in combat, including command of coalition forces during the Surge in Iraq, command of U.S. Central Command, and command of coalition forces in Afghanistan.  Following his service in the military, Gen. Petraeus served as the Director of the CIA during a period of significant achievements in the global war on terror.

Gen. Petraeus graduated with distinction from the U.S. Military Academy and subsequently earned M.P.A. and Ph.D. degrees from Princeton University's Woodrow Wilson School of Public and International Affairs.  He later taught international relations and economics at the U.S. Military Academy and completed a fellowship at Georgetown University’s Institute for the Study of Diplomacy.  Gen. Petraeus has received numerous U.S. military, State Department, NATO and United Nations medals and awards, including: four Defense Distinguished Medals, the Bronze Star Medal for Valor, the Combat Action Badge, master parachutist wings, and the Ranger tab, and he has been decorated by 13 foreign countries.

In addition to the positions he has held with KKR since leaving government, he also served as a Visiting Professor of Public Policy at CUNY's Macaulay Honors College for 3-1/2 years.  Additionally, since 2013, he has been a Judge Widney Professor at the University of Southern California and a Senior Fellow at Harvard University. Gen. Petraeus is also a member of the board of the global cyber security firm Optiv, a personal venture capitalist, and Senior Vice-President of the Royal United Services Institute.

He also serves as a member of the boards  of The Institute for the Study of War, The Atlantic Council, The Woodrow Wilson Center for International Scholars, and over a dozen veterans service organizations.