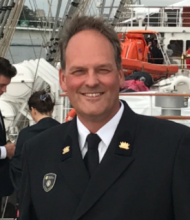 Herman is an elected member of the city council in his hometown.