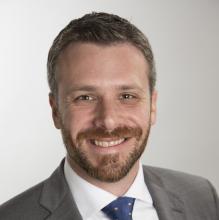 Joshua M. Kram is senior director for Middle East Affairs at the U.S. Chamber of Commerce where he oversees programs and policy initiatives to broaden commercial relationships between the United States and markets in the Middle East.  Kram advises corporate leaders on public affairs, regulatory, and business development matters.

Kram also heads the U.S.-Israel Business Initiative at the United States Chamber of Commerce, the only national business advocacy organization dedicated to strengthening the economic and commercial relationship between the United States and Israel.  The U.S. Chamber is the world’s largest business organization and the leading voice for American business, representing the interests of more than 3 million businesses of all sizes, sectors, and regions.

Previously, Kram was the Washington director for the Joint Distribution Committee.  There he established the organization’s public policy operation and guided its advocacy efforts.  He also served as deputy political director and foreign policy adviser to Hillary Clinton’s 2008 presidential campaign.

Earlier in his career, Kram advised Fortune 500 companies, political candidates, and startup companies on marketing and branding strategy while at leading firms in Atlanta and Jerusalem.

He graduated Phi Beta Kappa from the University of Florida and holds an M.B.A. from Emory University, where he was a Goizueta Leadership Fellow.  He is a Truman National Security Fellow.