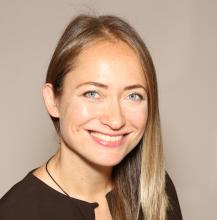 Katia Gaika is an Executive Director at NGRS, an executive search and organizational consulting firm and a former Deputy Director of the IT Cluster of Skolkovo Foundation (Russia’s Silicon Valley project) where she was responsible for building partnerships with companies, corporation, educational institutions and venture funds as well as for special media projects aimed at promoting high-tech entrepreneurship. Prior to Skolkovo she spent a year starting a new TV channel (“Russian Life”) for Sistema Mass Media – one of the biggest media holdings in Russia. Ms. Gaika first made a career as a photo-journalist and worked for Vogue, Paris Match, Harper’s Bazaar, GEO, Marie Clair and Elle among many others. After graduating from Columbia University,  Katia led a number of projects in media, financial and government sector for Booz Allen Hamilton (now Booz&Co, a top management consulting firm) in New York, Dubai, Cairo and Moscow.