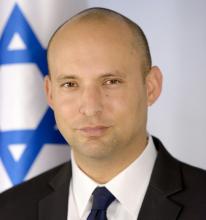 Naftali Bennett is Israel's Minister of Education and Minister of Diaspora Affairs. He is also chairman of HaBayit Hayehudi, the third largest party in the government, and a member of Israel's inner Security Cabinet.

As a commander in one of the IDF’s most elite commando units, Bennett has led soldiers on counter-terror operations deep behind enemy lines.

Today, he holds the rank of Major and is an active reservist in the IDF's elite General Staff Reconnaissance Unit, better known as Sayeret Matkal.

Bennett grew up in Haifa and was active in the Bnei Akiva youth movement. He received his Law Degree from Hebrew University of Jerusalem.

Bennett is married to Gilat, a professional pastry chef; they have four children and live in Ra’anana.